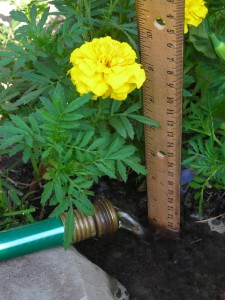 Because we’ve had a few showers lately, Western New Yorkers think their gardens have gotten enough rain. Unfortunately, “Our gardens are actually facing near drought conditions,” said Ken Re, who is in sales and is the director of marketing for Russell’s Tree and Shrub Farm in East Amherst.

“In this dry weather you should be watering regularly–-every other day if you can,” he said. “If you don’t water enough, your plants are placed under stress but may not show the effects until next year.”

People often ask him how many gallons of water their plants need.

That depends on what kind of plant and type of soil you have, but trying to calculate it that way makes watering more difficult than it has to be.

Basically, you want water to reach the roots–all of the roots– of your plant. In addition, you want to water the soil near the root system because dry soil around the roots acts like a sponge and will draw water away from the plant.

For established gardens, Re suggests starting by putting the water on low and directing the stream at the base of the plant until the area puddles up. Move on to another plant, then another until all the plants have been watered. Then, go back and do them all again. When you’ve completed that, hose down the rest of the bed to keep it moist.

“Many people water their gardens but the water doesn’t even penetrate the entire layer of mulch,” Re said. After you think you have watered enough, move some of the mulch away. You may be surprised to find that the water has seeped down through perhaps an inch of mulch.

It’s very important to water newly planted plant material. Remember that the area the plant can draw water from is limited to the size of the root ball. If you’re watering shrubs or trees, it’s best to set your hose on a trickle at the base of the plant for about three to five minutes.