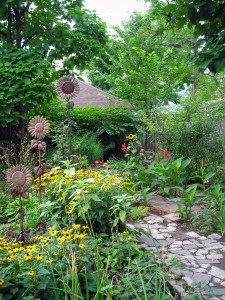 Gardening doesn’t have to be an expensive hobby.

“I didn’t spend one cent on this garden,” said Dave Derner, who created a backyard retreat at 1088 Elmwood Ave., Buffalo, where he lives above Half & Half Trading Co.

He got plants that nurseries or co-ops were going to throw out. Friends gave him plants as well. Many of the plants flourished.

“I just put things in and let them grow,” Derner said. “It’s amazing how things just want to grow.”

He also makes good use of free items he finds. When workers were tearing up the street, he salvaged the bricks they dug up and used them along a pathway. A

piece of curb is used in a table.

He also has a piece of the former Continental Night Club as well as pieces salvaged from demolitions. He has gotten leftover chunks of granite from a local company that makes granite countertops. Derner, a professional sculptor who created the statue of Saint Marguerite d’Youville for D’Youville College, uses many of his own works in his garden.  Many of his salvaged items serve as  the bases for his sculptures, including one of a series of baby birds, shown at left.

Another way to save money is to be creative with containers. Derner took old crucibles used for melting metal and uses them as planters, which you can see in the photo at right.

Derner’s sculptures can be seen throughout his garden. In the first photo, you can see his sunflower sculptures. Below left, you can see a sample from his  series of bronze tiles and ornaments that feature a dragonfly, sunflower and elm leaf. He used these tiles  in the elegant gate leading to the backyard, and you can see them pressed into the sidewalk at Buffalo Seminary as well. He sells his work and can be reached at davederner@gmail.com. 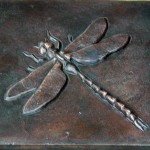 Derner has two elm trees in his backyard that are doing well and which he believes  must be resistant to Dutch elm disease, which in the 1960s felled the beautiful elm trees that once lined Elmwood Avenue.

In addition to an eclectic array of flowers, Derner plants many vegetables including heirloom potatoes, oregano, leeks, four kinds of mint and three kinds of garlic. He is growing four kinds of onions, including Egyptian onion (a kind of heirloom onion). He also grows  10 kinds of peppers, including bhut jolokia, which is recognized as the hottest pepper in the world. Many of these are grown on his flat roof. 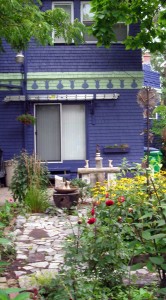 When dandelions pop up in his garden, he eats them, too. While some people enjoy them just in springtime, Derner eats them throughout the year, especially with pasta.

“I can go out and pick 12 different things from my garden in one day,” he said.

His art studio in the Tri-Main Building in Buffalo has large windows that let in plenty of sunlight, allowing him to continue growing his peppers and other plants during the winter.

Derner was originally a biology major, but he took only one botany class.

“I just did this for fun,” he said, looking at the space that was once just lawn. “I guess I’ve sort of become a gardener.”

Derner’s garden was on Garden Walk Buffalo on July 24 and 25.

Other stories from Garden Walk Buffalo: 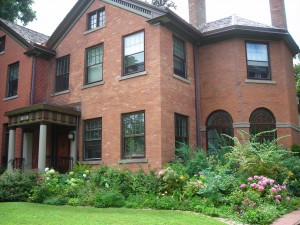 Lynn and Alan Stout have lived at 801 West Ferry, Buffalo, for 20 years, and they have built their lavish gardens bit by bit.

They shared their work with the public during Garden Walk Buffalo on Saturday and Sunday, July 24 and 25.

About 350 gardens were displayed on Garden Walk Buffalo, making it one of the largest garden tours in the nation.

Visitors to the Stouts’ home were treated to large, full gardens in both front and back. 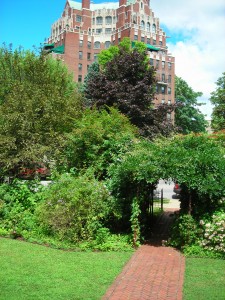 The gardens start as soon as you get to the property. The Stouts have created a border garden along the sidewalk that is both welcoming and private. The photo at right is the view from the porch looking at the street. While the tall plants, trees and shrubs lining the sidewalk block the view of the busy street, the trellis creates a doorway that invites visitors onto the brick path leading to the front steps.

A lush garden with elbow-to-elbow plants lines the long driveway leading to the backyard.

As you can see in the photos below,  gardens line the large, grassy backyard. 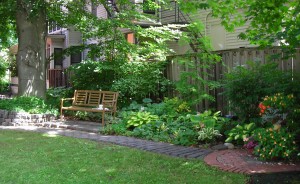 “This used to be all blacktop,” Lynn said. “We put in everything but the trees, doing one area at a time. Now we have too many areas!

“My husband does all the walkways and stone work, and I do the plants.”

They get some help with the maintenence. 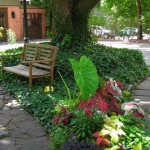 Marina, where annuals from around the world are planted to see what will grow in our unpredictable climate. From there it stretches east to include City Hall and the Historic West Village, Symphony Circle and the Kleinhans Community, Allentown, the Cottage District, Columbus Park and Prospect Hill near the Peace Bridge, and Elmwood Village.

Free trolleys were available during the walk and included guides from Buffalo Tours. 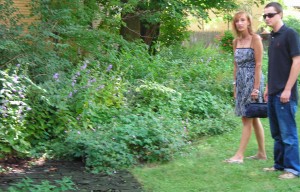 Tens of thousands of people visited the gardens, including Kelly Porter of Lyons in the Finger Lakes Region of New York, who was visiting her son, Ian Block.

This entry was posted on July 26, 2010 at 5:29 pm and is filed under Garden Walks, Perennials, Shade, Uncategorized. You can follow any responses to this entry through the RSS 2.0 feed.