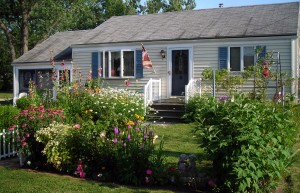 When the Hagemans started gardening nine years ago, they had nothing but bushes. Now perennial beds fill both their front yard and backyard.

She and her husband Cliff shared their garden at 73 Grant St. with visitors  during the 7th Annual Lancaster Garden Walk on Saturday and Sunday, July 17 and 18. 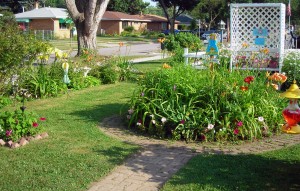 In their backyard, paths built by Cliff lead to various garden beds. In the center garden, lupine and irises bloom in the spring, followed by obedient plant and other perennials, as well as annuals. This year, all of the annuals were pink for their daughter Katie’s wedding shower, which was held outside. The white structure you see is actually a cozy seat. 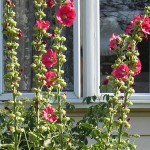 One of Debbie’s favorite flowers is the hollyhock, shown at right. Hers stand straight and tall. She thinks this is because as the leaves get unsightly from worm holes, she cuts the leaves off, which removes weight from the stem.

The Hagemans have a pussy willow tree and peony tree, as well as peonies, day lilies, roses, beard tongue, black-eyed susans, stokes asters and blazing star liatris. Hibiscus, with flowers as big as dinner plates, will bloom in late August. 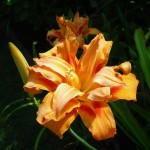 “Some people are sad when one flower goes away, but I’m not because then there’s another,” Debbie said. “I don’t really think there’s a flower I don’t like.”

Shown at left  is an uncommon double tiger lily, which grows with extra sets of petals. It was passed down from her grandmother. The gladiolus in the Hagemans’ garden also has sentimental value because Cliff’s mother used gladiolus for the flowers for their wedding. 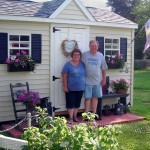 The Hagemans also have a vegetable garden with red and black raspberries, three kinds of peppers, green and yellow beans, zucchini, gourds, Indian corn, tomatoes, sunflowers and wildflowers. From the vegetable garden, you can see the Hagemans’ new shed, which is decorated as lavishly with flowers as their house is.

Building and maintaining their gardens is a lot of work. This year they got help from daughter Jenny, who was visiting from Virginia, as well as their son Clifford.

“We do it because we love to garden,” Debbie said.