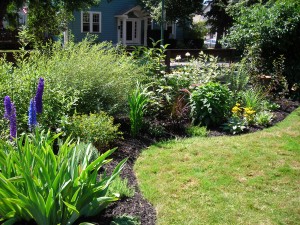 The gardens at 222 Cumberland Ave. were on display Sunday, July 18 during the 10th annual South Buffalo Alive garden walk.

Dave Testa, who lives in the corner property with Jack Tontillo, envisioned the kind of mixed border you might see at a big English house.

“I hate the formality of straight lines,” he said, explaining the curved design he used.

When choosing plants, “I mixed in whatever appeals to me,” he said, “with bigger things in back.” He hopes that those plants will triple in size to provide privacy from the street for what is both a side yard and backyard. He also watched for deals when choosing  plants for the border.

“It’s cheaper than a stockade fence,” he noted.

Other large plantings around the back deck provide privacy and shade there.  Container plants are used on the back deck. They include the Italian fig at left, which is beginning to get fruit. It will have to be taken inside over the winter. 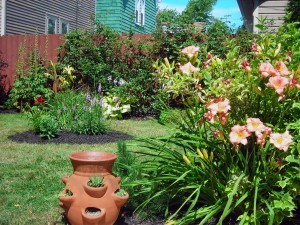 Other borders are used throughout the backyard, which can be seen in the photo at right. Testa had doubled the width of the border gardens, and plans to double them again. The island is new.

Testa had cedars and arbor vitae, but they all got crushed in the October Storm of 2006.

“Nothing was salvageable,” he said. 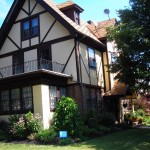 He is considering taking out his roses because they’re not doing well and they take too much work. He prefers other perennials that are low maintenance.

For most of his perennials, “dead heading (cutting off dead blossoms) and trimming is all they need,” he said.

He shared a couple of tips for other gardeners. First, be careful of the spacing of plants.

“It’s tempting to put things too close together,” he said, looking at an area with four shrubs that would have done well with three.

His second tip is to use lilies.

“It’s a foolproof flower,” he said. “It’s exotic looking, it always comes back and it multiplies.”

South Buffalo Alive is a non-profit organization dedicated to the beautification of the South Buffalo community.